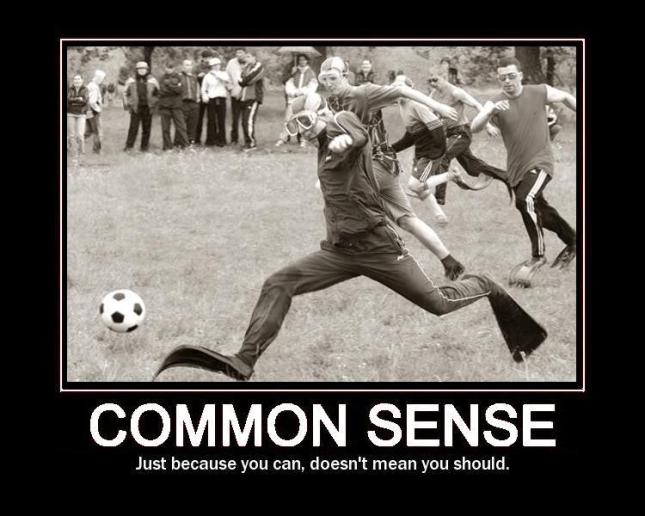 Who says you have the rules?_ Sourced from Googlr

Let me start with saying that the concept behind Common sense is a whole fusion of nonsense!

Am I pissed? Hell Yea!

Majority of folks live with the mind set that some rules in life are impossible to overturn or some situations are as permanent as death. In this state, Yorubas are quick to say “A gba fun Olorun”. A sign of resignation, or more exclusively; a lack of hope or faith and then they put it all on God for righteousness sake so at least God won’t say you never told me. Most times, they never expect something good to come out of those situations and their belief always makes sure nothing good happens.
The ability of Lazarus to rise up was not because of his faith in miracles, or that of his sisters or anybody whatsoever, his resurrection was based solely on the faith Jesus had and that belief was strong enough to wake him from four days of slumber in the clutches of death.

Einstein, Newton, Shakespeare are not famous because they stuck to the norms, its cuz they dreamt more and pushed more than a normal human thereby discovering things the lay man would consider out of this world. We owe our comfort today to these people and everybody who cared to have uncommon sense and we also owe them an obligation that we’ll stick to continuing the legacy they left off, unfortunately, this isn’t the case.

Now, this is where I focus on Africa; the continent that has refused to grow. Our beliefs, culture, tradition which in actual sense were meant to ginger development in us have suddenly been considered as stumbling blocks to our progress as a people. Our skill in picking out the worst in any situation is second to none, no wonder we are second to none in developing allergies to innovation. We claim the whites are super smart and God has favored them greatly and all this done to just hide the fact that we are scared of exploring the unknown. If everybody was like us, we’ll still be taking the occasional trek from Ethiopia to Gabon because nobody would have invented cars and the Wright brothers would have died popular bicycle repairers; popular on their street alone! If man was scared, America would still be a fallow unexplored land and Columbus would have died a man who had a phobia for water, Imagine!

What am saying here, is that the world is a large expanse of norms and common sense and majority of its inhabitants are blinded by these and nothing is being done to change this. Instead some parents deceive themselves and send their kids to school, you’ll be a great scientist or physicist they’ll tell him in elementary school. when he is in secondary school, they force him to study science, he goes to the university and studies a professional course, comes out and works everyday of his life trying to make ends meet and finally dies a man whose obituary would claim lived a fruitful life! Garbage! Pure rubbish!

A wise man or woman once said;

The graveyard is the richest place on earth.

because it contains ideas and potentials that men have let die with them all in the name of playing safe and living a coded life. Back track to bible days, King Solomon wrote in Proverbs 2:6 that “”God is a mine of Common sense”. In other words, just like the purity of fuel becomes better with depth, so does the depth of your common sense increase when you till this mine. some fellows would barely scratch the surface; some like Jesus would as deep as they can get and end up having their name stamped in the sands of time while some fools in the end would not even carry an axe talk less of attempting to explore the mine. that’s why some folks would forever consider a 7 course meal a once in a lifetime luxury and some others take it a brisk breakfast.

It’s high time we Africans wake up to the fact that the norms don’t govern the world anymore; common sense doesn’t make sense anymore. It’s time we learn that what great men would term normal to them is what we might see as the actions of a demigod.

It’s time to think outside the box.

It’s time to explore the unknown.

It’s time to take those “no turning back risks”.

Push yourself to the limits because in actual sense, there are no limits in life.

God is called the ageless, change less and limitless God and trust me, those names are not some sort of fallacy, they are all perfect descriptions of his person. Therefore, if we can take to him, his qualities would rub off on us. Remember anything started without God is running with a self destruct timer. So if you can think like you would expect him to, take risks that you think Jesus would take, take that gigantic step that you’ve imagined Shakespeare taking and watch your life soar out of obscurity and get stamped in History.

For Your Info
Shakespeare started thinking out of the box at a very tender age. At the time when boys stealing apples from orchards of the well to do was considered the most mischievous thing a child could do, Shakespeare was caught stealing a sheep!
I’m not telling you to go steal but you get my drift, don’t wait till your 40 to explore the unknown, it might just be too late.

I hope you’ve been inspired.

Thank you for Reading.

“For a NONSENSE to be worth being termed a MASTERPIECE, the creator of that NONSENSE is either doing something extremely WRONG or RIGHT”

Sometimes I get lost in a world of myself,

lacking inspiration from all frontiers.

And even when I try to locate something,

I’m not implying that am unlucky (I dont believe in luck anyway),

it’s just so hard to be creative and original at the same time.

Take for instance, this write-up.

It is being written out of lack of inspiration.

And I totally agree with that.

I’ve found out that my best write ups have been written in periods of blackness.

In summary, I’ve made sense out of nonsense or so I think.

How this concerns you, I really dunno.

But you can take a cue from my experiences,

Search for fulfilment when all is lost,

Apply nonsense in your methods,

Have fun with what you are doing.

“The best results in life are gotten while you are playing… not wasteful but intelligent play… the one you engage in when doing something you love.”

That WOW moment might just be around the corner.

It worked for me, it might just do the same for you.

The rest is left to you.

I rest my case.

Stale? Not to worry, we’ve got you covered.

Error: Twitter did not respond. Please wait a few minutes and refresh this page.

This work is licensed under a Creative Commons Attribution-NonCommercial-NoDerivs 3.0 United States License.